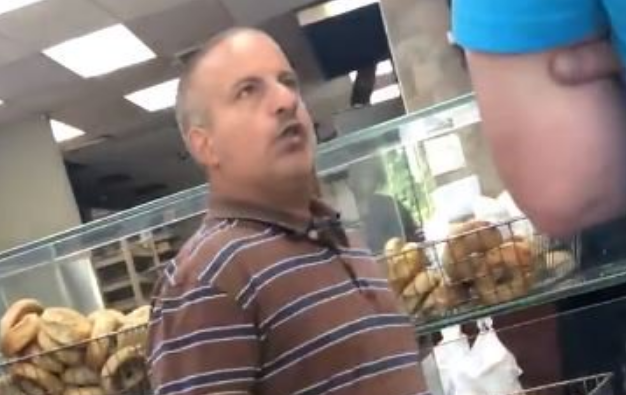 A man who has been dubbed by the internet as ‘angry bagel shop man’ has gone viral after going on a bizarre and seemingly unprovoked rant.

In the video, the man can be seen (and definitely heard) yelling about dating sites and ‘women in general’ calling him short.

He is then see attempting to pick fights with other men in the store.

The bagel man says: “Why is it ok for women to say ‘oh you’re five feet’ on dating sites, ‘you should be dead’,” before slamming his newspaper to the ground. “That’s ok?”

A girl is heard replying: “Who said that to you here? Nobody.”

To which the man yells: “Women in general have said it on dating sites! You think I’m making that s**t up? Everywhere I go I get the same f*****g smirk with the biting lip.”

He then re-enacts the biting lip before telling two men- one of whom appears in frame- to shut up and challenges them to a fight.

so in bagel boss this morning, the misogynistic douchebag seen in the video was degrading almost all of the female staff as well as other patrons. fuck this guy. pic.twitter.com/LZh1Uk4UXZ

The video has been shared numerous times and has more than 21 million views.

Then a second video was uploaded showing what happened in the aftermath of the tackling:

If you guys wanted to know what happen next, here ya go pic.twitter.com/jOHzispksW

After all that, he picked up his bagel and was on his way.