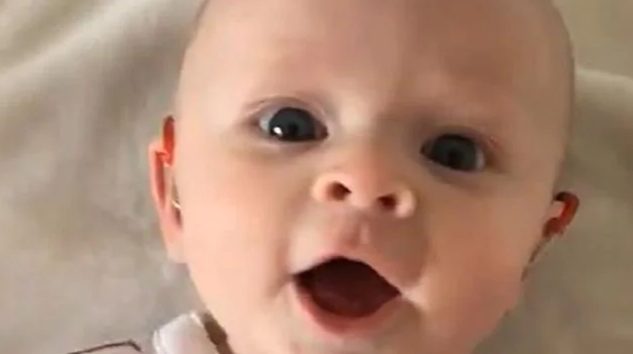 Four-month-old Georgina has captivated the internet with her adorable giggle after her parents switch on her new hearing aids. Picture: Paul Addison/Twitter

Twitter has exploded with love for the little girl.

A deaf baby girl’s reaction after having her hearing aids turned on in the morning has gone viral on twitter, as people marvel at how adorable it is.

The baby’s dad Paul Addison, 32, posted the cute video on his Twitter page which shows little Georgina reacting to her mother’s voice for the first time.

”When our daughter’s new hearing aids are turned on in the morning,” the dad from North Yorkshire in England captioned the post.

The video has amassed more than 50,000 likes and counting since it was uploaded on Thursday.

”This is so cute. So you get to have this cute reaction every morning?! My heart,” one woman wrote, to which Mr Addison responded: ”Yes we do! So lucky right?!”

”Absolutely beautiful video, your lovely daughter is so cutie! In floods of happy tears watching her!!” said another.

”She will grow up to be an all round amazing human being x watch out for the lip reading they learn way too much,” a third joked.

”What an extraordinarily beautiful baby!”

Mr Addison has since thanked social media users for their kind words and the hospital for ”their continued hard work”.

Baby Georgina was diagnosed as severely deaf in September and wears a hearing aid in each ear to amplify sound.

Absolutely beautiful video, your lovely daughter is so cutie!! In floodsof happy tears watching her!! As a wife,I’m of two and I’m partially deaf in both ears and do sign language this video just shows how much we NEED our #NHS!! Xxxx 🌹❤️👍 😍 #ThursdayThoughts #KindnessMatters

That is the most wonderful thing I’ve seen in a long time!

“You use these hearing aids and it’s like the lights have been switched on.

”As a consequence, she is immediately more alert, happy, and can hear her mum’s voice, which is absolutely delightful.”

Electric Picnic tickets sell out in under three hours