This might make you think twice before posting a bad review.

A restaurant owner in the UK has blasted a customer who left a bad review of their cheeseboard TripAdvisor, describing him has a “sexually frustrated keyboard warrior”.

The customer named James described his “horror” at the “juvenile attempt of a cheese board” served at the Oxton Bar and Kitchen in Birkenhead.

He also slammed the waitress who “erupted with anger like she’d produced the cheese herself” when he sent the dish back to the kitchen.

“After seven years of loyal patronage to the OBK, I was unfortunate enough to order the cheese board (for heaven’s sake don’t do it), it arrived via our unfriendly host Angela where it was discarded on our table with a bang,” he wrote.

“I’ve seen better spreads on Over70s.com. Anaemic crackers, putrid celery and cheese from an over-milked cow. With trepidation it was time to pay the bill, I approached the bar with caution. Angela had removed ‘it’ from the bill, like she’d done me a favour!”

James added that he would “like to complement the rest of the staff and previous seven years for excellent service”. “I’ll be back!” he wrote. 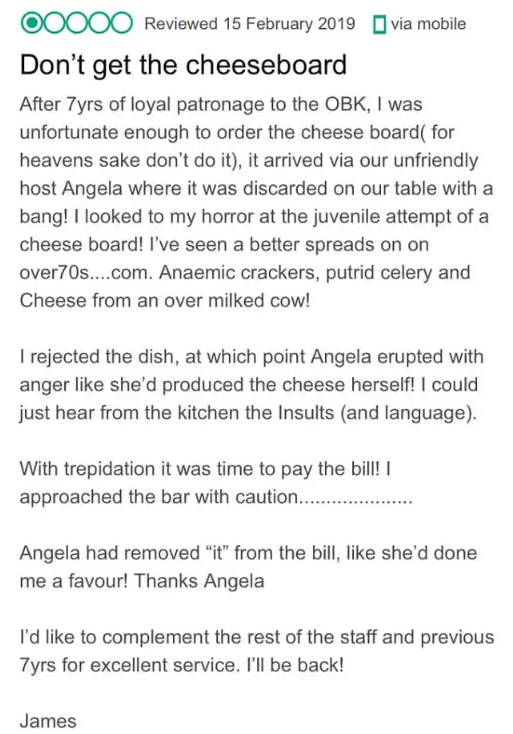 In a scathing response to the review via Facebook the Oxton Bar and Kitchen said the review was an example of: “Why I want TripAdvisor to burn.”

“No, James is a tw*t because as he states ‘after seven years of loyal patronage … I’ll be back!’ F**k you, James. In seven years of ‘excellent service’, why have you not left one single positive review for us? Yet one cheeseboard not to your liking (which we took off the bill?) and you give us a one-star review.

“You say you’ll be back! Come back when you’ve given us a positive review for each of the excellent experiences you say you’ve had over the last seven years, otherwise don’t bother.

“The amount of negative reviews which start with ‘last visit was excellent … however’ blah f-ing blah.

“This sh*t keeps me awake at night. I employ 23 staff. We all have families to feed. By all means leave us a cr*p review if you don’t like us, but don’t ignore the positive experiences, or flit over them in a one-star review. Why don’t they warrant a separate five-star review?

“TripAdvisor is simply an avenue for keyboard warriors to vent their sexually frustrated bad moods on business owners, and an arena for fraudulent positive reviews to negate humanity’s desire to complain more than they compliment.”

Yikes. And if you ever find yourself at the Oxton Bar and Kitchen you might be better off avoiding TripAdvisor all together after last year, the owner blasted a different customer who complained about being charged eight pounds for fish-and-chips.