”But that is how I gave my dad herpes.”

Of all the bizarre stories in the history of the internet, this has to be in the running for the title of the weirdest of the lot…

A Canadian woman has explained how she thinks she was responsible for putting her parents marriage on the rocks, because she accidentally gave her dad herpes.

Let’s back up and take a deep breath before we begin, there’s a lot to take in here.

The entire story appeared on Reddit, in a post titled “TIFU [Today I F**ked Up] and gave my dad herpes”, you may want to grab a cup of tea for this one. 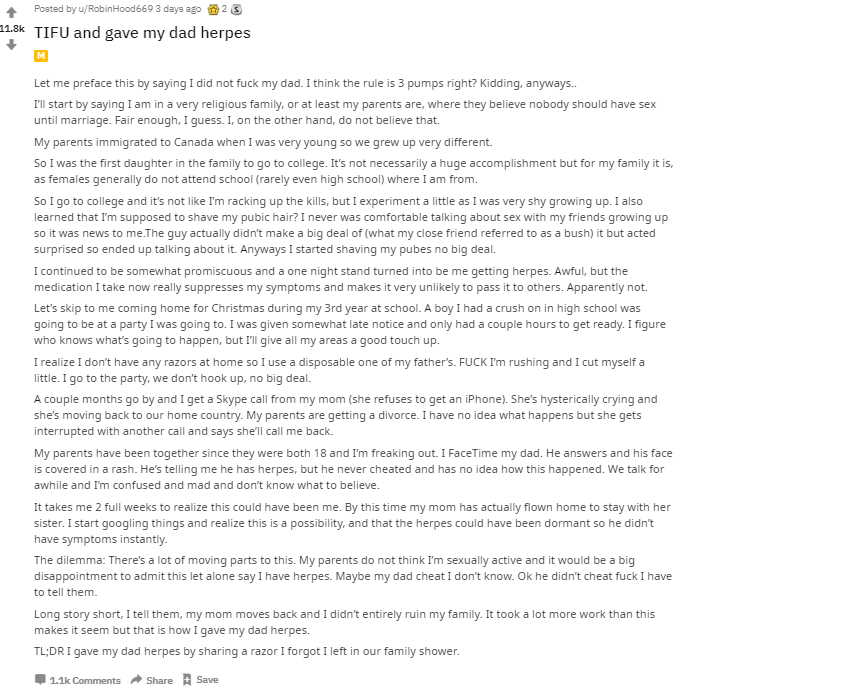 How it all began.

The woman explains how her parents have been together since they were 18 and are strictly against sex before marriage due to their religion.

However, she does admit she was already “somewhat promiscuous” by the time she arrived at university.

“I had a one-night stand that turned into be me getting herpes,” she wrote.

“Awful, but the medication I take now really suppresses my symptoms and makes it very unlikely to pass it to others.

“I’m rushing and I cut myself a little”

Fast-forward to the holidays last year when she came home from university to visit her parents.

While getting ready for a party, she borrowed one of her father’s disposable razors to shave her legs, and this is when the trouble begins.

“I realise I don’t have any razors at home so I use a disposable one of my father’s,” she said.

She completely forgot about the entire thing until her mum called her in tears months later – announcing that her father has herpes.

“My parents are getting a divorce and I’m freaking out,” she said.

“I FaceTime my dad. He answers and his face is covered in a rash.

“He’s telling me he has herpes, but he never cheated and has no idea how this happened.

“We talk for a while and I’m confused, and mad, and don’t know what to believe.

“It takes me two full weeks to realise this could have been me. By this time my mum has actually flown home to stay with her sister.

“I start googling things and realise this is a possibility, and that the herpes could have been dormant so he didn’t have symptoms instantly.” 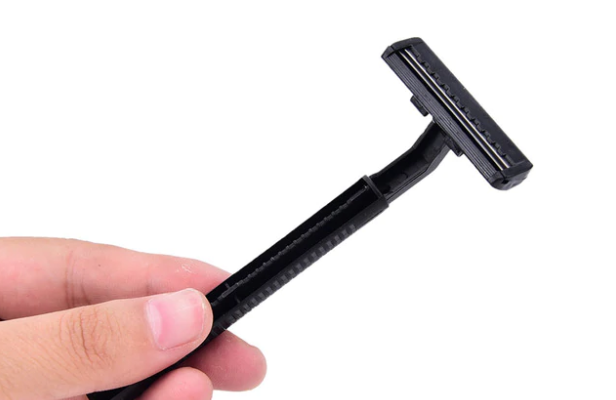 “That is how I gave my dad herpes”

So this is how it all played out…

“My parents do not think I’m sexually active and it would be a big disappointment to admit this let alone say I have herpes,” she said.

“Maybe my dad did cheat I don’t know.

She bites the bullet and reveals all to her mum and dad.

“My mum moves back in and I didn’t entirely ruin my family. It took a lot more work than this makes it seem-  but that is how I gave my dad herpes.”

“This is the part I can’t get past”

Obviously, Reddit had a field day with this one, with the post quickly racking up 1.1k comments in a matter of hours.

“Just a small correction, but you likely gave your mum herpes as well!” one user said.

“You shaved with one of your dad’s face razors… and you put it back? Eww….” another added.

“Jesus Christ she gave someone a pretty, not-so awesome std, that they have to live with forever, and probably other people too,” a man said.

“This is the part I can’t get past. It was disposable, throw it out,” another user agreed.

“Don’t shave your pubes with someone else’s razor, especially knowing they use it on their face (maybe their pubes too.)”

Here Are All The Fish & Chips Shops Offering Half Price Tomorrow