An adorable 18,000-year-old puppy named Dogor has been found in Siberia 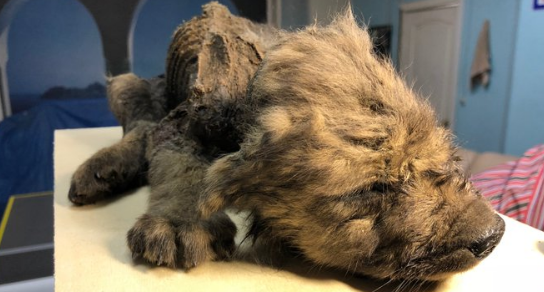 Scientist are trying to determine if the pup is an early dog or a wolf.

An extremely well preserved tiny pup which died around 18,000 years ago has been discovered in the permafrost in Yakutsk in eastern Siberia.

Scientists believe the puppy who has been named Dogor, died at the tender age of just two months old.

He’s so perfectly preserved that his whiskers, eyelashes, nose and much of its fur are in good condition – as though he’d died only recently.

Geneticists are saying he could be a wolf, or he could be the world’s earliest known dog.

”It’s normally relatively easy to tell the difference between the two,” geneticist David Stanton of the Centre for Palaeogenetics in Sweden told CNN.

“We have a lot of data from it already, and with that amount of data, you’d expect to tell if it was one or the other. The fact that we can’t might suggest that it’s from a population that was ancestral to both – to dogs and wolves.”

And through selective breeding by humans over generations upon generations, they have developed into the slobbery four-legged friend we know and love today.

Confirmed: Less than 30 asylum seekers will be housed at Ballinamore site