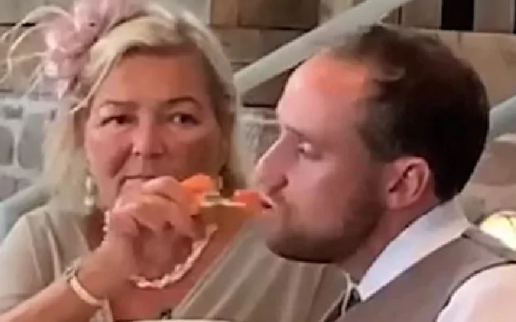 Wouldn’t be your proudest moment…

A wedding is about the coming together of two people and by default you also gain a whole new set of family members in the process.

However, one groom appeared to be already relying a little too much on his new mother-in-law within hours of walking her daughter down the aisle.

In a video taken by a wedding guest at a reception, and shared by UNILAD, the drunken groom is seen being hand fed by his angry new mother-in-law.

As the pair sit next to each other at what appears to be the top table, the mother-in-law lifts a plate of food up to her son-in-law’s mouth for him to take a bite in an effort to sober him up.

As he struggles to swallow a piece of ham, she throws an angry look at the camera — and a sarcastic thumbs up — before stuffing the remaining piece of meat into his mouth.

The hilarious clip has left thousands of Facebook users in stitches.

One person wrote: “Best mother in-law of the year.”

Another commented: “All I will say is that he has an amazing mother in law!! The fact that she is feeding him is so sweet.”

One person teased the biggest “mistake” the groom made was not eating. 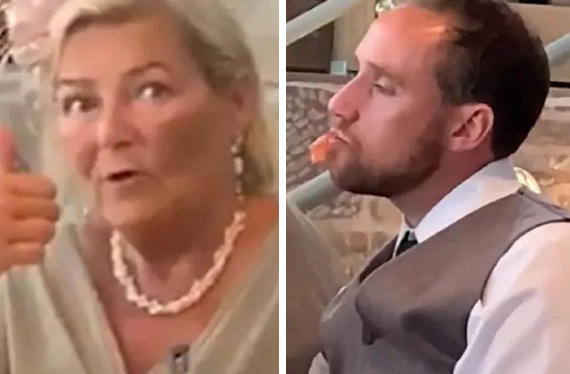 However, not everyone thought it was funny, commenting that he’d probably “ruined” the day with his antics.

“Meh, this isn’t funny, it’s sad. Why would you not want to remember the happiest day of your life? And then to BE REMEMBERED as so drunk you couldn’t eat food?”

“If someone gets this drunk at their own wedding … it suggests to me … it wasn’t a particularly happy day for them!!!” another said.

One angry person said: “Wow……he’s a keeper. Getting into that state on your wedding day is recipe for disaster for the marriage…..so disrespectful.”

Others slammed the drunken behaviour as “sad”, “stupid”, “awful” and “insulting”.

For some, the video brought back memories of their own wedding disasters:

One woman wrote: “My husband got so drunk he barfed all over the honeymoon suite, slipped and cracked the tiles in the shower, temporarily lost his wedding ring and passed out before we consummated the marriage..I found it bloody hilarious tbh.”

And another revealed: “This was my husband at our wedding reception.”

An Irish whiskey has been named the best in the world