Elaine Mai & MayKay Team Up On New Single ‘No Forever’ 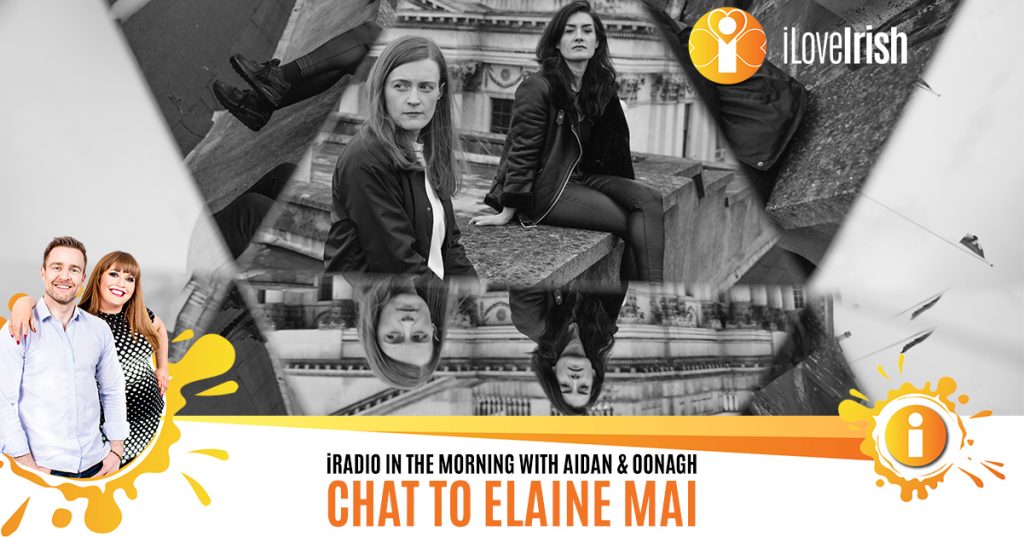 iRadio in the Morning with Aidan and Oonagh caught up with Irish electronic producer and singer Elaine Mai. Her  new single ‘No Forever’ is an iRadio  i Love Irish track this month and is the first to be taken from her debut album, due for release later in 2021.

Many music fans will already be familiar with Elaine who was a featured singer on the No.1 single ‘Dreams’, the cover of The Cranberries’ hit by Irish Women in Harmony, which took the country by storm in 2020 and raised over €250,000 for anti-domestic violence charity SAFE Ireland.

Aidan and Oonagh chatted to Elaine about the track which features the inimitable vocals of MayKay – familiar to many as the current host of Other Voices and former member of cult Irish bands Le Galaxie (2017-2019) and Fight Like Apes (2006-2016).  Fitting for the beginning of a new year, ‘No Forever’ is a hopeful track that builds to an uplifting crescendo reminiscent of 90s club classics in parts and making great use of MayKay’s vocal range.

Elaine spoke about how she had been working on the music for the track when she reached out to MayKay to collaborate on creating the lyrics and vocals for the track.

The song carries the theme of home and belonging with Elaine told Aidan and Oonagh is the theme that we can expect from her album which is due out this year.

Hinting at what her debut album might sound like, Elaine says: “All of the songs from my upcoming album relate to a central theme of home and belonging. This can be interpreted in many different ways, from feeling uplifting and reassuring, to more sad and mournful. I love writing music that can make you feel different things at the same time and that was the goal with this track.”

Elaine Mai has played live extensively at festivals including Longitude, Body & Soul and Electric Picnic, as well as in the UK and Europe. She has opened shows for leading international and Irish acts including Ray Davies, Emile Sandé, James Vincent McMorrow, Marina and the Diamonds and Hozier. In addition, Elaine is a huge advocate for gender equality and women’s rights, she is one of three artists representing Ireland with Keychange – an EU initiative working towards a total restructure of the music industry to help reach full gender equality.

The ‘No Forever’ Collab Among Elaine Mai, MayKay and Ruth Medjber

Elaine Mai says: “Creating with friends is one of the most enjoyable things about music for me. Working on this with MayKay was a breath of fresh air. I’m a huge fan of her music and artistry and everything about this collaboration worked. She added a new story, interpretation, and angle to the track, and her vocals are just incredible. Collaborating with Ruth has also been amazing – she’s an absolute powerhouse! She has an incredible eye and her vision for the video was clear from the start. Bob and I are long-time collaborators and friends so it’s been great to work with him again.”

“I haven’t released any music since I was with Le Galaxie,” says MayKay, “so this could have been a very daunting project, but working with Elaine has totally let me skip that. She’s an amazing producer to begin with. Her attention to detail actually makes me nervous! I sometimes like writing to a brief but she gave me total freedom on this which meant a lot to me and has totally spurred me on to work on my own music too. It’s invaluable working with someone who is madly in love with what they do – it’s not always like that!”

Ruth Medjber, who is the tour photographer for Hozier and whose first book ‘Twilight Together’ (nominated for an Irish Book Award) captured portraits of a nation in lockdown, says: “When I first heard this song I instantly saw it, clear as day. The structure, the lines, the colours, they were all there, so incredibly bold. I was supposed to be doing the photographs but since I had such a visual response to the song Elaine asked if I would do the video. Making videos is not something I do, or ever planned on doing, until I heard this song. I’ve worked with Elaine and Maykay on lots of photography projects over the years. We unintentionally had an all female crew on the shoot days which made for a really relaxed and fun environment. Working with Bob Gallagher has been so enjoyable too. He seemed to be able to pull reason and form from my meandering, nonsensical emails and twist everything I shot into something beautiful.”

WATCH THE VIDEO FOR ‘NO FOREVER’