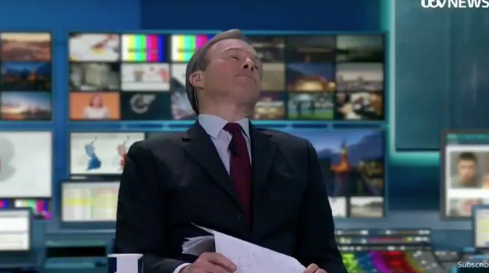 ”Tom Bradby literally summing up how everyone is feeling.”

General elections are always like a marathon for everyone involved in the process.

But for those in the media it can be particularity exhausting trying to keep up with everything that’s happening round the clock.

Which is why people on Twitter can’t help but laugh, and relate to ITV’s Tom Bradby who looked like a broken man in the small hours of Friday morning.

After signing off and passing the baton to Good Morning Britain, Bradby not realising that he was still on the air on the webstream, slumped back in his chair and let out a huge sigh of relief/exasperation.

oh my god @tombradby thought their show had finished when it hadn’t. what an iconic ending. pic.twitter.com/FT6ytihWZw

And when you take into account the fact that the 52-year-old presenter had just put in an 8 hour shift, it’s fair enough.

The clip of Bradby has already been viewed more than 15,000 times on Twitter and everyone can definitely relate.

Tom Bradby literally summing up how everyone is feeling pic.twitter.com/rbLabc1ePD

This would also be me after 8 ours straight on air… https://t.co/h2jxYztWiF

This is most of us this morning. Heavens help us! https://t.co/4ZbZsy3USm

The only good thing about this whole farce, @tombradby always comes through https://t.co/rlb4Jp5px0

Charlotte Crosby accuses ex of using her for fame