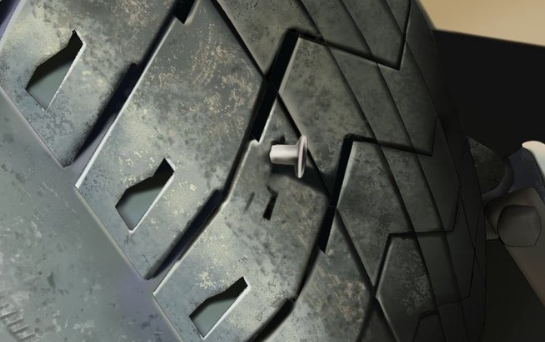 The unnamed woman called in to work to say that she was having car troubles, sending a photo as proof Credit: Twitter

Upon inspection her ‘flat tyre’ is clearly photo shopped emoji.

A woman has sent Twitter into raptures, after her attempt to get a day off work because she ‘had a nail stuck in her tyre’ backfired spectacularly.

The bold employee contacted her boss saying she wouldn’t be able to make it into the office, because a nail had pierced her car tyre leaving her unable to drive.

my coworker called in (yet again) and said she had a nail on her tire that caused her to have a flat. i need everyone to stop what they’re doing and ZOOM IN TO THE NAIL IN THE PICTURE SHE SENT MY BOSS pic.twitter.com/4NcJGuvF4F

But when the boss shared the image with a co-worker, Sydney Whitson, who couldn’t believe her eyes.

Not only was the roadside photo a fake downloaded from Google images, but the tyre and nail were both cartoon imagery designed in Photoshop – and when zoomed in, they didn’t look real at all.

Ms Whitson shared the image on Twitter in disbelief.

She wrote: “My colleague called in (yet again) and said she had a nail on her tyre that caused her to have a flat.

“I need everyone to stop what they’re doing and ZOOM IN TO THE NAIL IN THE PICTURE SHE SENT MY BOSS.”

The tweet has since received over 45k retweets and 247k likes, while thousands more commented on the photo sharing hilarious reactions and their own stories of fake sick days.

Ms Whitson even revealed that the image her co-worker tried to use to get out of work was ‘‘the first thing” that popped up on google when searching for ‘nail in tyre’ (we checked and it is).

This is one white lie the woman won’t be living down any time soon.