Gardaí, civil servants and the GAA are among those celebrating Pride today

Thousands have descended on the capital. 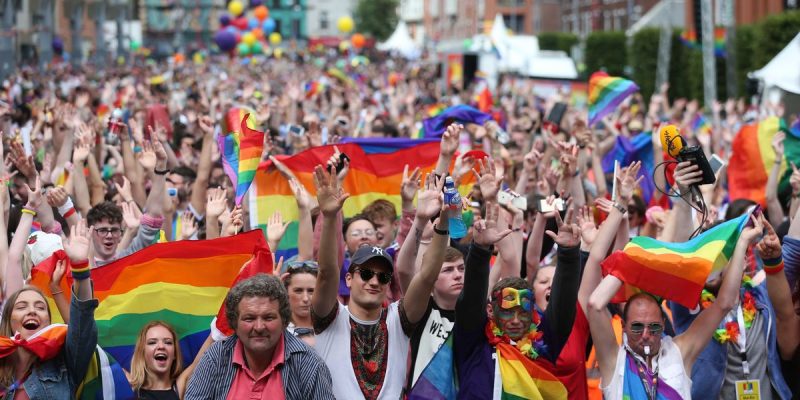 Ten of thousands of people are taking part in the Dublin Pride Parade this afternoon.

It’s been held since 1983, when the the first big march for gay rights took place in Ireland.

For the first time, civil and public servants will take part, including gardaí, Defence Forces and all government departments.

Neil Ward, from the Department of Justice, explains how it came about;

“In June and July last year, staff in the Department of Foreign Affairs and Department of Justice and Equality started organising LGBT staff networks within their own departments.

Those two groups then got together over the last few months and put out a call to the wider civil service to see if there was an appetite to participate together, and the response was just been overwhelming.

“I suppose people think it’s just the gay gardaí marching and it isn’t, we’re probably almost a minority in the group!

There’s people marching for their friends and their colleagues.

I know quite a few some parents marching for their children today, which is lovely thing for them to do, especially for the older people who would have entered a slightly different organisation.

For those reasons, I think it’s pretty wonderful what we’re doing.”

While celebration is in the air, support is also being provided for those who don’t feel accepted in their communities and families, and find this time of year difficult.

“There is a belief that, especially since the Marriage Equality Referendum in 2015, that all the problems have been solved…but it’s very far from the truth.

In fact, in some climates, there’s actually a resurgence in discrimination and hate crime towards members of the LGBT community – especially the trans community.”

Game of Thrones creator has responded to season 8 backlash