One of the ultimate ‘ah lads’ moments has transpired in Pakistan, after the countries Provincial Information Minister Yousuf Shaukat Zai conducted a Facebook Live press conference with a cat filter turned on.

Minister Yousuf Shaukat Zai, who is a member of the ruling party PTI (Pakistan Tehreek-e-Insaf) in Pakistan was talking to the local journalist at a press conference that was being broadcast via social media, blissfully unaware that he was sporting whiskers.

The video immediately went viral on social media but was later deleted from the political party’s official page. 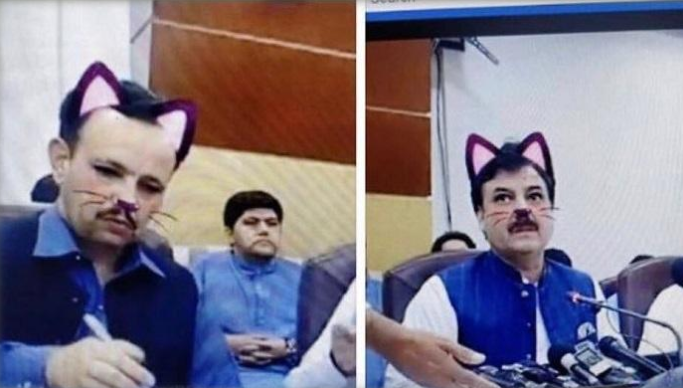 Responding to the embarrassing incident, PTI’s social media team has called it a “human error” and said that “all actions have been taken to avoid such incidents in future.”

“Yesterday whilst covering a Press briefing held by KP’s information minister Shaukat Yousafzai, a ‘cat filter’ was witnessed by the viewers which was removed within few minutes,” the party statement stated.

What have this official PTI KPK Facebok page has done with KPK Information Minister Shaukat Yousafzai 😂 !
This is INSANE. @SAYousafzaiPTI pic.twitter.com/bttJt5FrdB

One person wrote on Twitter, “according to KP government’s social media team we now have a cat in the cabinet.”

Another tweeted, “Who let the cats out!!!”

According to KP government’s social media team we now have a cat in the cabinet #Filter pic.twitter.com/LNl7zwOfLU