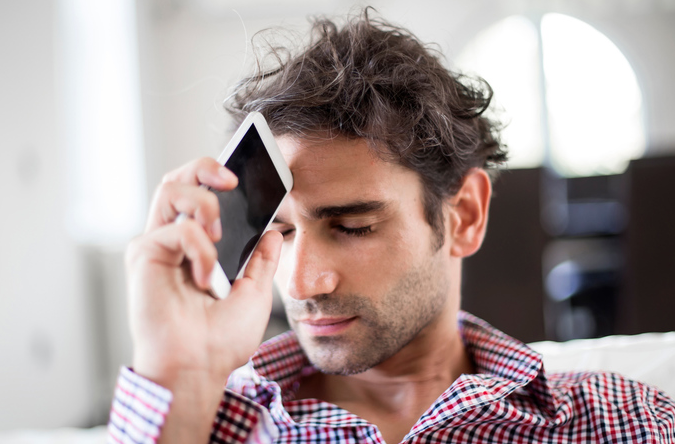 “You guys seem perfect for one another.”

Tinder has 50 million users all over the globe, but there would barely be a user out there who hasn’t across someone they know on the app at some stage.

It’s awkward enough even when it’s just an acquaintance, so just imagine that sheer stomach dropping feeling if you stumbled across your other half on the app…

Well that’s exactly what happened to one married couple who matched with each other while the wife was away on business.

Sharing the story to Reddit, the anonymous husband said the pair had met on the app three years earlier and had been married ‘quite happily for over 14 months now’.

He wrote: “A month ago she left on a business trip for a week and I found myself downloading Tinder on a particularly lonely night. I don’t even know why. I didn’t have any intentions. But I did it.

“On Monday my wife left for another business trip. Last night I once again downloaded Tinder and started swiping. Again, I had a laugh, but ultimately was bored of it.

“Then I saw her picture come up. I stay shocked for a moment. I wondered if I should just delete it and pretend nothing happened. I thought maybe a bot stole her picture…. But I read her profile… it’s her. It’s her now and it’s her live. There’s even a picture of her where I am cut out.

“I decided to make a bold move and swipe right. I swiped and we matched.” 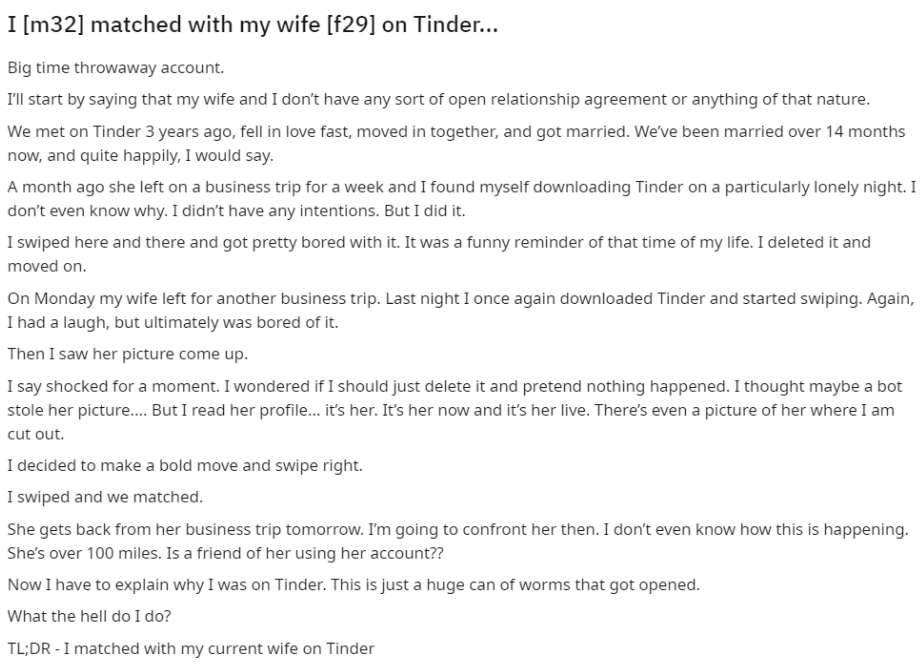 Obviously the husband has no right to be upset because he is doing the exact same thing…but he went on to explain how he freaked out at the prospect of having to bring the subject up when she returned home.

He added: “I’m going to confront her then. I don’t even know how this is happening. She’s over 100 miles. Is a friend of hers using her account??

“Now I have to explain why I was on Tinder. This is just a huge can of worms that got opened. What the hell do I do?”

Unsurprisingly, he found very little sympathy among fellow Redditors, with some claiming his wife may not have been on a ‘business trip’ at all.

While others suggested that maybe his wife had joined Tinder to catch him in the act after being tipped off by a friend.

“I think someone told her he was on there and she was trying to catch him out to see if he tries cheating every time she is out of town,” said a second user.

While another added: “Honestly, what probably happened is that someone she knows or one of her friends saw you on tinder the FIRST time you went on, so she decided to investigate for herself.”

A third person simply put: “You guys seem perfect for one another.”