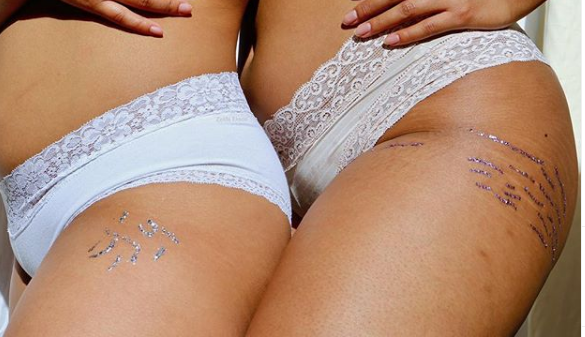 The airbrushed filtered fake reality of Instagram and its influencers have finally met a worthy challenger.

Skin splotches are a part of life…

“In my most fragile state, I wish I didn’t let the opinions of others affect me the most. I found myself changing my appearance and interest because someone else thought it was “weird” or “different”.⠀ •⠀ •⠀ •⠀ #selflove #stretchmarks #strengthmarks #turningscarsintostrengths #bodyacceptance #empowerment #glitter #bodypositive #bodypositivity #bodyposi #bodylove #loveyourlines

The campaign was launched by a woman named Zelda, who started out by taking pictures of her family and friends – decorating their stretch marks with biodegradable glitter.

She then accompanied the photos with a short story describing their journey to self-love and acceptance.

“I love my scars. They have funny stories behind them and they are imperfect and I think it’s really special how our bodies heal themselves,” one contributor, Esme, told whimn.com.au.

“One day I was looking at myself naked in the mirror and just accepted my body for what it was. I looked and thought how bodies are really fucking weird and just decided to be easy on myself. “⠀ •⠀ •⠀ •⠀ #selflove #stretchmarks #strengthmarks #turningscarsintostrengths #bodyacceptance #empowerment #glitter #bodypositive #bodypositivity #bodyposi #bodylove #loveyourlines

“Accepting my body is still a work in progress, I am still working on learning about my body and accepting it. Now I am surrounded by strong and confident woman in my household and social life. They play a big role in the creation of my body image and self-love,” another, Lexi, said.

Since being launched in October last year, the campaign has already reached 15,000 followers and is growing at a rapid rate.

A brilliant way to combat the airbrushed fake reality we’re subjected to on a daily basis!

Ireland Simpsons Fans have created their own political party