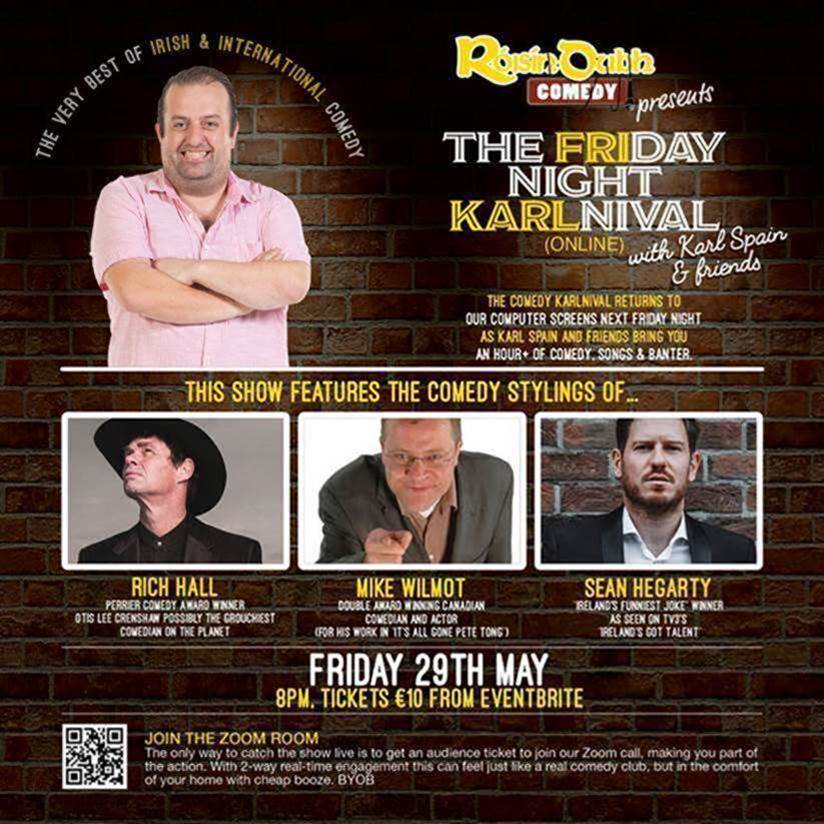 Aidan and Oonagh in the Morning caught up with one of Ireland’s finest comedians Karl Spain who has a real treat this Friday for comedy-goers who are missing their nights out. Karl Spain will be hosting a virtual comedy night with The Roisin Dubh in Galway with a very impressive line-up.

Listen Back To Their Chat In The Podcast Below

This show features the comedy stylings of…. RICH HALL, possibly the grouchiest comedian on the planet, MIKE WILMOT double award winning Canadian comedian and actor (for his work in “It’s All Gone Pete Tong”) and SEAN HEGARTY “Ireland’s Funniest Joke” Winner as seen on TV3s “Ireland’s Got Talent”.

The only way to catch the show live is to buy an audience ticket to join our Zoom call, making you part of the action. With 2-way real-time engagement this can feel just like a real comedy club, but in the comfort of your home with cheap booze. BYOB This ticket gives you access to the show on one device only but we don’t care how many people are watching from your couch. This one will not be going out live on Facebook. We can’t give a quality line-up like this away for nothing. Spaces are limited so hurry or you will miss the bus, zoom zoom! Starts 8pm, Tickets €10 plus fees on Eventbrite when you search ‘Friday Night Comedy KARLnival Online’. Link: https://www.eventbrite.ie/e/friday-comedy-karlnival-online-tickets-106140611426

Rich was the original inspiration behind Matt Groening’s character Moe Szyslak from The Simpsons – but that’s just one of many good reasons to go see him. His critically acclaimed deadpan style has established him as a master of absurdist irony and the king of rapid-fire wit. The Perrier Award-winning Montana native is renowned for his expertly crafted tirades, quick fire banter with audiences and delightful musical sequences. Rich is a comedian whose plain spoken growling indignation and acerbic observations have an unerring talent for hitting his targets with precision every time, leaving his audience hanging on every word and winning him fans all over the globe.

Toronto-born stand-up Mike Wilmot first started performing comedy in 1995, becoming a regular on the UK circuit. He has appeared multiple times at Just For Laughs in Montreal, as well as at festivals in Ireland, Scandinavia, Paris, Amsterdam, Hong Kong, Bangkok, South Africa and Melbourne – where he won the comedy festival’s Barry Award in 2003. He also won an acting award for his memorable appearance in the movie It’s All Gone Pete Tong

“Wanna play a joke on your chiropractor? Next time he starts working on you, go limp and soil yourself.”

One-liner comedian, Sean Hegarty has been seen wowing the judges on Ireland’s Got Talent, getting four yeses from the judges and making it to the live semi-final shows. As well as this, he has won Ireland’s Funniest Joke with his pizza pun, topping the public vote with over 65% voting in his favour.

He has supported Patrick Kielty on his Irish tour, came runner-up in the UK Pun Championships, written for BBC Radio & TV including panel show Monumental and online series Tight Shorts as well as having gigged all over the world in places such as France, Cyprus, Belgium and the Edinburgh Fringe. He has recently been seen in a BBC viral comedy video for BBC’s Mastermind and has racked up over 50 million video views online and attracted more than 70,000 fans on Social Media along with sold-out shows across the country. He also played a starring role in hit BBC comedy series, Late Licence, writing and acting alongside his wife, Derry Girls actress, Diona Doherty.

This show is hosted by the “achingly funny” Karl Spain. Karl has been in stand-up comedy for over twenty years. Last seen on telly hosting Laughter In The Eyre filmed at last years Galway Comedy Carnival, Karl is probably best known in Ireland for losing a few ounces on Celebrity Operation Transformation, and his TV series Karl Spain Wants A Woman in which he not only got huge ratings but he also found himself a woman. As well as being a regular at Kilkenny Cat Laughs, Galway Comedy Carnival, Vodafone Comedy Festival, Edinburgh Fringe Festival and Montreal Just for Laughs.

Last year saw 20% fewer births in Ireland than 10 years prior, according to CSO