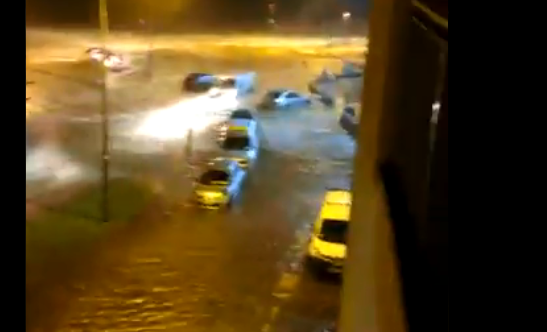 “It was very scary. That wind came from nowhere.”

Met Éireann have defended how a Status Yellow weather warning was updated to Status Orange in the hour before Storm Elsa caused chaos in Galway last night.

The national forecaster has faced criticism today from Councillors in Galway who say they were ”caught on the hop” when the storm struck.

Labour City Councillor for Galway, Niall McNelis said as a result of the weather warning being only a Status Yellow, locals were relativity unfazed and parked cars in an area of Salthill prone to flooding during storms.

Many cars were submerged by the water with some houses also being flooded.

Salthill, The Spanish Arch and The Galway Docks are badly flooded. High tide is not forecasted until 23:00 so this will get far worse for homes and businesses in the areas affected.

A full emergency response has been issued by The Chief Executive of GCC. pic.twitter.com/M36iLe82Yp

“A lot of people were out at Christmas parties last night or at the cinema didn’t realise this was happening. Everyone got caught on the hop,” Mr McNelis told the Independent.

“It was very scary. That wind came from nowhere, that’s why it caught everybody.

“Some of the cars have been rammed in to bottle banks down there and a number of them crashed into each other because the sheer volume of water just pushed them to collide around 8.30pm or 9pm when it really got heavy.

“Thank God nobody got hurt last night but the question must be asked – How did we go from a yellow to an orange so quickly?”

A spokesperson for Met Éireann has responded to the criticism, saying that the the forecasting service can only operate on information available to them.

Indications of worse than Status Yellow wind levels were included in the original warning, the spokesperson said.

“It was a very quickly moving system and it has moved way up to the North now.

“There was a weather warning out from the day before for it. The actual yellow wind warning stated that winds would be stronger than yellow-level winds on the West and South-West coast. It stipulated that for a time in the evening and early night, winds would peak, stronger winds possible in those areas.

“Our forecasts are based on the best available information a the time. We don’t follow one model, we have to analyse many different models and then make a judgment call. On balance, the evidence was that it was a high-level yellow warning with the possibility of, for short times, the wind peaking higher along that coast.”