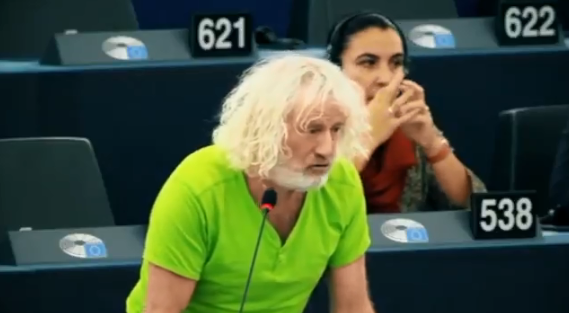 Irish MEP Mick Wallace has landed himself in hot water in the European Parliament, after using some colourful language.

Wallace referred to the Venezuelan opposition leader Juan Guaidó as an “unelected gobshite” during a debate on Venezuela on Tuesday.

A number of countries have recognised the opposition leader as Venezuela’s acting president over Nicolás Maduro.

Speaking during the debate, Wallace said: “Do you not agree that the recognition of Guaidó is an absolute embarrassment to anyone who has to occupy this chamber?

“It is a disgrace on the part of the member states of Europe that so many of them have recognised an unelected gobshite.”

It was quickly noted that Wallace would be reprimanded for his use of the word.

Wallace himself shared a video of the moment later on Twitter.

Venezuelans bombard him at the airport in Caracas with chants of, “Murderer! Murderer!”

(Too many videos like this to count today) pic.twitter.com/F5fPEqAquX

Guaidó has sought to challenge the leadership of Venezuelan president Nicolas Maduro, with some perceiving his actions as tantamount to a coup.

Guaidó has been supported in his claim to leadership by many EU member states, including Ireland, France, Germany, Spain and Portugal. The United Kingdom and United States also recognise Guaidó as president of Venezuela, though Maduro remains incumbent.