New Irish chaser makes his debut on The Chase

Darragh Ennis first featured on the show as a contestant. 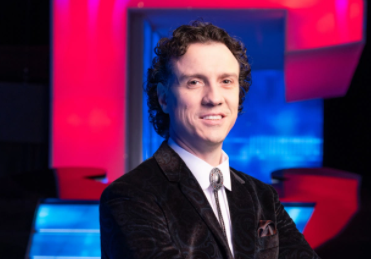 The brand new Irish chaser made his debut on The Chase this week.

Darragh Ennis from Dublin appeared as a Chaser on the show for the first time earlier today. The hit ITV show has dubbed him as ‘The Menace’ and he’ll feature as a regular on the show alongside fellow chasers The Vixen, The Sinnerman, The Dark Destroyer, The Governess and The Beast.

In an interview on the Elaine Show on Virgin Media One, the Dubliner explained where the nickname ‘The Menace’ came from:

“They had floated the idea of calling me the ‘Professor ‘ but I work I the University here and I really didn’t want to be called the Professor as that is a title you have to learn”, he explained.

“So the production team came up with it but they didn’t tell me.”

“So when I was on stage, when I walked on, that was literally the first time I heard it.”

Irish man Darragh ‘The Menace’ Ennis @bones_gilesis is the new Chaser in town.

After he takes to the hot seat, on the Chase today at 2pm on @VirginMedia_One , he will join the Elaine Show for his first Irish exclusive interview.
Join us from 3pm #TheChase #ELAINEVMTV @ITVChase pic.twitter.com/GK74nWT4Nr

But does he like his new show nickname? He told Clare McKenna who was in for Elaine Crowley this week that he’s gotten used to the new name:

Darragh originally appeared on the ITV quiz show as a contestant and blew show bosses away with his extensive knowledge.

How it all started #TheChase