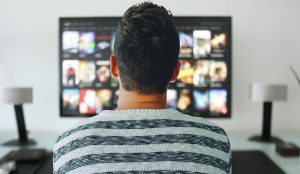 The one thing we can rely on during self-isolation is Netflix. If you’ve finally finished that TV series you’d been meaning to watch and are looking for something new well, good news. The streaming site has released a whole load of new shows and movies ahead of the weekend.

The six-part drama charts the origins of football and how those involved in its creation reached across the class divide to establish the game as the world’s most popular sport. The series is written and executive produced by Downton Abbey creator Julian Fellowes and stars Edward Holcroft Kevin Guthrie and Charlotte Hope.

The Letter for the King (streaming now)

Based on the best-selling Dutch book, The Letter for the King is the tale of one boy’s quest. On the eve of becoming a knight, he has to fulfil a promise for the mortally wounded Black Knight with the White Shield. He must deliver a secret letter on which the fate of the entire kingdom depends, and in the process becomes not just a knight, but a true leader. Check out the trailer:

Self Made: Inspired by the Life of Madam C.J. Walker: Limited Series (streaming now)

Academy Award winner Octavia Spencer stars as Madam C.J. Walker, the trailblazing African American haircare entrepreneur who was America’s first female self-made millionaire. Inspired by the book, On Her Own Ground written by Walker’s great-great-granddaughter A’Lelia Bundles, this Netflix original series brings the uplifting story of this cultural icon to the screen for the first time. Against all odds, Walker overcame post-slavery racial and gender biases, personal betrayals, and business rivalries to build a ground-breaking brand that revolutionized black haircare, as she simultaneously fought for social change. The four-part limited series stars Blair Underwood as her husband C.J. Walker and Tiffany Haddish as her daughter Leila.

Changing his name to Saul Goodman, Jimmy recruits a new crop of clients. Kim wrestles with a moral dilemma at work. Lalo’s feud with Gus heats up.

Daring adventure meets chilling darkness as Riverdale explores a new side of grief and the gang prepares for the ultimate test: senior year.

A story of intergenerational friendship and coming of age, set in the world of ultras culture during the last five weeks of a soccer championship.

A young man sets out to become a movie star, until a summer romance shows him the fine line between dreams and delusions.

In a prison where inmates on high floors eat better than those below, who get the scant scraps, one man tries to effect change so everyone gets enough.

Juan Manuel Fangio was the Formula One king, winning five world championships in the early 1950s — before protective gear or safety features were used.

Among the eccentrics and cult personalities in the stranger-than-fiction world of big cat owners, few stand out more than Joe Exotic, a mulleted, gun-toting polygamist and country western singer who presides over an Oklahoma roadside zoo. Charismatic but misguided, Joe and an unbelievable cast of characters including drug kingpins, conmen, and cult leaders all share a passion for big cats, and the status and attention their dangerous menageries garner. But things take a dark turn when Carole Baskin, an animal activist and owner of a big cat sanctuary, threatens to put them out of business, stoking a rivalry that eventually leads to Joe’s arrest for a murder-for-hire plot, and reveals a twisted tale where the only thing more dangerous than a big cat is its owner.

The Boss Baby: Back in Business: Season 3 (streaming now)

After losing his job at Baby Corp, Boss Baby goes freelance and turns his playgroup into a makeshift field team. Cue the critical mission!

Clever sheep Shaun, loyal dog Bitzer and the rest of the Mossy Bottom gang cook up oodles of fun and adventure on the farm.