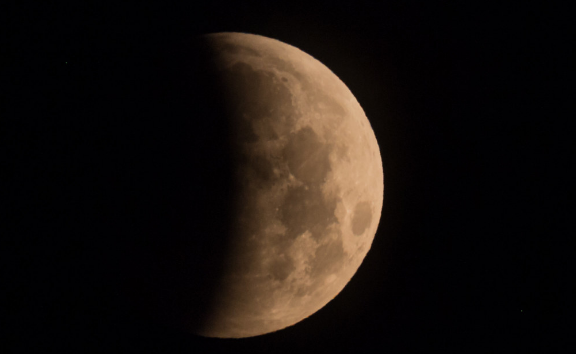 Keep an eye out tonight.

One of the most visible lunar events for a number of years may be visible over Ireland tonight.

At around 10:30pm, the Earth’s shadow is set to cross the face of the moon, resulting in a partial lunar eclipse.

Annoyingly, there are showers forecast in the evening, but they are expected to arrive after the event has finished.

Coincidentally, the eclipse falls on the 50th anniversary of the launch of Apollo 11, which resulted in humankind setting foot on the moon for the first time.

What causes an eclipse?

A lunar eclipse occurs when the Earth, sun, and moon are almost exactly in line and the moon is on the opposite side of the Earth from the sun.

When the full moon moves into the shadow of the Earth it’ll dim dramatically but usually remains visible, via beams of sunlight passing through Earth’s atmosphere.

David Moore, founder of Astronomy Ireland said the “eclipse occurs exactly 50 years to the day” that Neil Armstrong was “launched to the Moon to make his historic ‘small step/giant leap”’ a few days later.

He added: “As the sky darkens and the Moon rises we will get our best views of the eclipse from Ireland.”

A statement from Astronomy Ireland said that “Ireland won’t see another eclipse of the Moon for over 2 years and it won’t be as good as this one so everyone is urged to check the sky from 10pm to midnight, even if there are clouds around.”