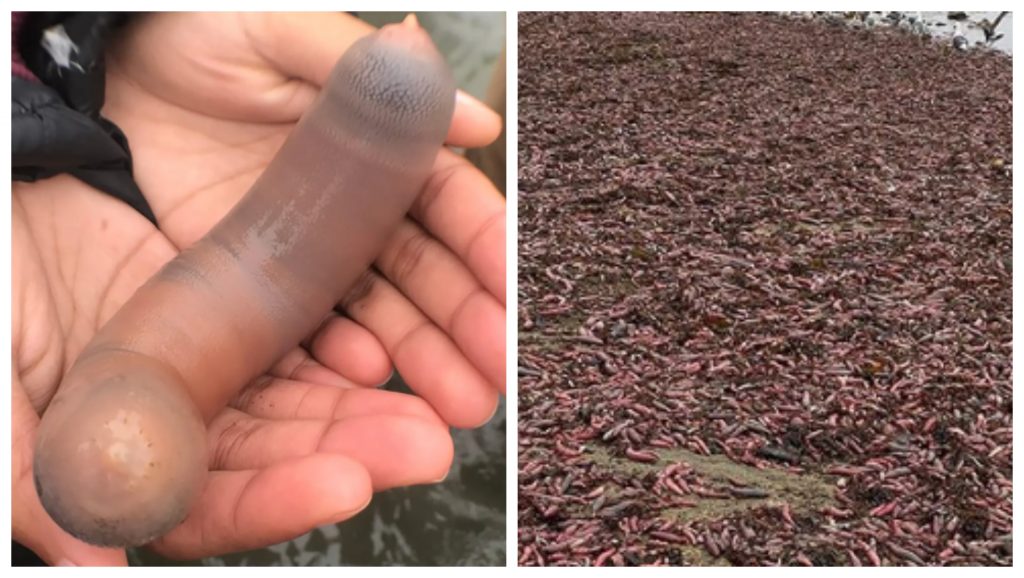 Social media has been sent into meltdown, after images of thousands of fat innkeeper worms washed up on a beach.

Although they are a type of worm, they are widely referred to as the “penis fish”.

The worms bury themselves deep beneath the sand, but recent storms have uprooted them and Drakes Beach, about 50 miles north of San Francisco, has been covered in the creatures.

Just in case you’re wondering why these little critters are known as penis fish… well just have a look at them and decide for yourself whether it’s an appropriate name or not.

SHOOK 😳 Thousands of these marine worms—called fat innkeeper worms, or “penis fish”—were found on Drake’s Beach last week! These phallic organisms are quite common along the West coast of North America, but they spend their whole lives in U-shaped burrows under the sand, so few beachgoers are aware of their existence. ⛈🌊 A recent storm in Northern California brought strong waves that washed away several feet of sand from the intertidal zone, leaving all these fat innkeeper worms exposed on the surface. 🏖 Next time you go to the beach, just think about the hundreds of 10-inch, pink sausages wiggling around just a few feet under the sand. 🙃 . . Get the full story in our new #AsktheNaturalist with @california_natural_history via link in bio! (📸: Beach photo courtesy David Ford; Worm photo by Kate Montana via iNaturalist)

Biologist Ivan Parr discovered the ‘penis fish’ washed up on the beach on December 6, a few days after a particularly violent storm.

In Bay Nature, Parr wrote: “The same phenomenon has been reported over the years at Pajaro Dunes, Moss Landing, Bodega Bay, and Princeton Harbor,

“I’ve heard my share of imaginative theories from beachcombers, such as flotsam of a wrecked bratwurst freighter.

“In truth, these are living denizens of our beaches rudely, yet also mercifully, mostly called ‘fat innkeeper worms.”

Fun facts about the fat innkeeper worm or ‘penis fish’.