The CSO has announced the most common surnames in Ireland 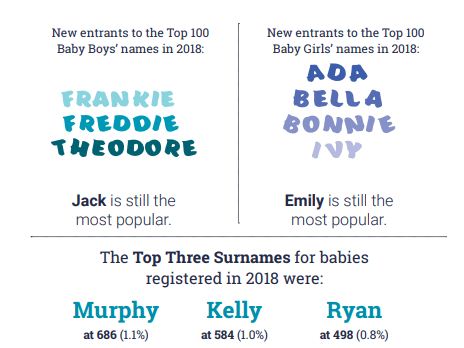 Murphy, Kelly and Ryan were some of the most common surnames among babies in Ireland in 2018 according to the Central Statistics Office (CSO).

New data released by the CSO revealed the three surnames that topped the list in 2018 with Murphy being registered 686 times, Kelly 584 times and Ryan 498 times.

There’s been a few interesting additions to the top 100 most popular first names in Ireland.

Frankie, Theodore and Freddie have all made it into the top 100 for boys, while Ada, Bella, Bonnie and Ivy have become popular for girls.

Jack still takes the crown for the most popular name for boys and Emily tops the list for girls.

The population of the country is just under the five million mark. However, the number of births are dropping.