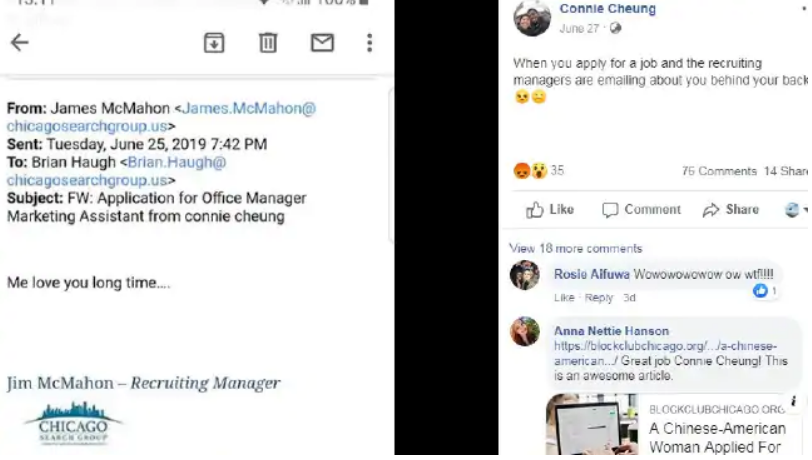 “This company has disgusting behaviour.”

A recruiter who emailed a racist phrase to a jobseeker has been widely condemned on social media.

The incident occurred late last month, when Chicago woman of Asian descent Connie Cheung applied for a job as an office management assistant which was advertised on LinkedIn.

She was then offered an interview by Jim McMahon, the vice president of the Chicago Search Group recruiting firm.

But the next day, Ms Cheung received a “demeaning” email from Mr McMahon which was apparently sent by mistake.

The email was allegedly meant to have been sent to the company’s president Brian Haugh, but it also landed in Ms Cheung’s inbox.

It contained the phrase “me love you long time”.

A phrase which first appeared in the 1987 film Full Metal Jacket, and is now widely considered to be offensive to people of Asian descent.

Ms Cheung posted a screenshot of the email to her personal Facebook account with the caption: “When you apply for a job and the recruiting managers are emailing about you behind your back …”

It received an out-pour of angry comments labeling the email “racist” and “sexist”.

“I’d report them. That’s straight up racist,” one Facebook user wrote, while another added: “This company has disgusting behaviour.”

“This is highly unprofessional and unwarranted,” another posted.

A friend of Ms Cheung emailed Mr Haugh asking for an apology, however he said he had “bigger problems” to deal with. And he even appeared to threaten Ms Cheung and her friend with legal action.

“ … with all due respect, I am focused on bigger problems than you friend being offended by a movie quote. Sorry, but just don’t have time for this. Best of luck to you! You may want to Google libel laws before your crew posts things publicly. Our attorneys are on call …” a screenshot of the message posted on Facebook reads.

In a Facebook post, Ms Cheung said Mr McMahon had called her to apologise and “explain that the quote he used regarding me was from a movie”.

But she said it was still inexcusable.

“Regardless if it was from a movie, it doesn’t justify that this phrase has been used to demean Asian women for decades and that this phrase was emailed from someone’s work email to a co-worker in regards to a potential employee, who happened to be an Asian American female,” she wrote.

Mr McMahon apologised again in an interview with USA Today.

“This was an isolated incident that will not happen again and my sincerest apologies go out to Connie and anyone else who was offended by this statement,” he told the publication.

“It was intended for my business partner of over a decade who was also my college roommate.

“This does not excuse or justify anything. However, imagine if everyone had every inappropriate comment or poor joke that was typed, texted or spoken available for the public to see. It is a reminder for all of us that we should communicate with anyone as if everyone was listening.”

Mr Hughes also apologised, and said the email was “unacceptable”.