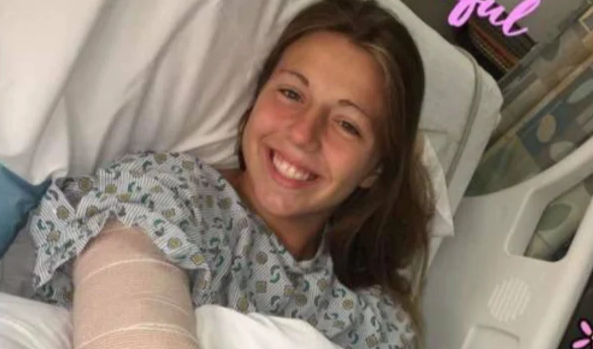 A woman in the US will more than likely always ring the doorbell whenever she visits home from now on, after she was shot in the arm by her mother – who wasn’t expecting her.

The accident happened when Hanna Jones, 18, “ran through the door with excitement” to see her mum in Girard, Ohio – however Renee Jones thought she was an intruder and shot her.

It was Hannah’s intention to pay a surprise visit to her mum after spending a month in college.

“As I ran through the door, she was in fear for her life and shot me,” Hanna said in a Facebook post.

“I crouched down and let out two screams,” she wrote.

Her boyfriend heard the screams and ran into the house and called emergency services.

The boyfriend told the operator that she was bleeding “pretty bad,” according to the call obtained by 21 News.

“My girlfriend just came home from college and her mom didn’t know, like honestly — she accidentally shot her,” he said.

“I sure am lucky to still be here!”

Hannah revealed she has a broken elbow in three places, and now has eight screws and three plates in her arm after extensive surgery.

“It truly has been a crazy few days, but I am beyond thankful to still be here on this earth today,” she wrote.

“I sure am lucky to still be here! It still baffles my mind to know that I could be dead, but thankfully I had an angel looking over me that night.”

Girard Police Chief John Norman said Renee had a concealed carry permit, allowing her to have the gun.

“She had a gun readily available and she fired a round at someone coming through the door,” he told 21 News.

He said prosecutors haven’t decided yet whether charges will be laid for the shooting, but he did have some advice for those whose relatives have guns in the house.

“If you realise someone has a gun for protection, and they’re not expecting you — announce yourself when you enter the home, or even if you’re getting up to get a drink of water in the middle of the night,” he said.

Revolut down for some customers this afternoon