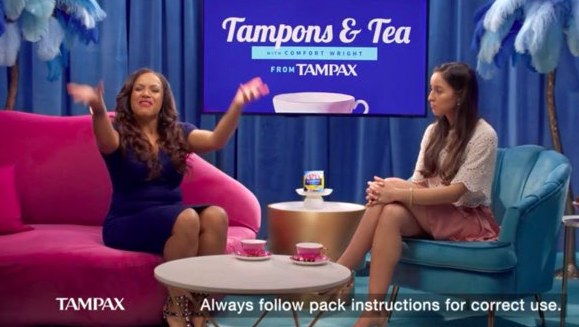 The ad has been removed from the air. Image: [email protected]

She said the decision was made based on evidence the ad had caused ‘widespread offence’.

The Head of the Advertising Standards Authority of Ireland (ASAI) is defending its decision to ban an ad for tampons.

There’s strong been criticism of the move online, after just 84 complaints were made to the body about the Tampax ad.

The advertisement addressed how tampons should be used, using a mock chat-show setting.

Orla Twomey, Chief Executive of the ASAI, said they are willing to work with the company to have the advert brought back to air:

”Our complaints committee have made a decision that based on the evidence that was presented to them that the advertising has caused widespread offence.

”We are open to working with the advertiser to see how the ad can be brought back to market, because the requirement is that it be amended or withdrawn.

”So there is the option to look at the advertising and see if it can be amended”.

Many people were very critical of the decision.

Following the ad’s removal from the air, there was a strong reaction on Irish Twitter, with #Tampax trending throughout last night and into today.

2,080,000,000 people in the world menstruate. 84 people in Ireland complained about the #tampax ad so they removed it from the TV. The 2,500,000 women in Ireland should not be okay with this. It’s 2020 and we’re still making women feel ashamed of their natural bodily functions 😡

Hi, I’m Shauna. I’m a woman, I get a period and let’s be honest, you do need to just ‘get them up there’. Factual not offensive. #Tampax

I was thrown off a WOMEN’S sports team in the early 90s for using the word TAMPON. 25 years later Ireland is banning TV tampon ads. Tell me again how this country loves women. #tampax

My wife laughs at me because I randomly walk around the house saying “You gotta get it up there girls”. Those who complained about the advert are just sad. #tampax

We finally get an honest ad about tampons and periods and 84 losers have to go and ruin it for us. I wish a lifetime of badly applied tampons on them. #tampax

There is almost 2.5m women/females in Ireland. There were 84 complaints – seriously. The Body that decided this appears to have 15 members of which only 4 are women. This is 2020? This is further censorship of women still. OMG this country is getting worst #tampax #Censored

However, some were in favour of the move.

While the majority of twitter users were against the ban, there were some who supported it.

Agree with the ban 100%, an unnecessary vulgar and ‘in your face’ advert. And enough of the feminism, if this was a similar kind of ad aimed at men I’m sure there would be the same complaints. #tampax (never thought I’d use that hashtag)

Folks, can we just all agree the #tampax ad was shite? It was like an ill-conceived, last-minute segment on Loose Women. We can open another thread on terrible ads (it’ll be a long one… looking at you Perf with Surf),