Watch: Insane footage of trampoline blowing onto the M7 at Limerick 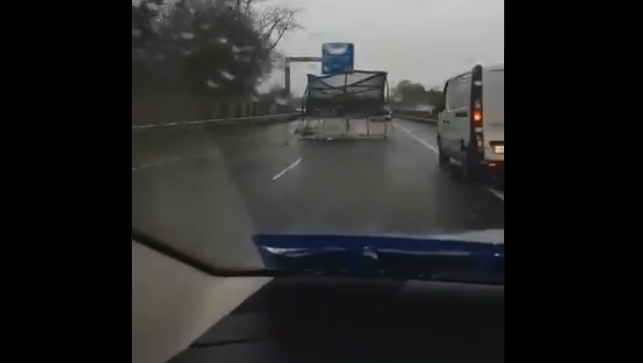 ‘Anyone lose a trampoline?’

Incredible footage of a trampoline blowing onto the M7 motorway outside Limerick city as Storm Brendan batters the country.

The footage posted on Twitter shows an upright trampoline obstructing the busy road at the exit for University Limerick.

Michael Finnan said on Twitter: “Anyone lose a trampoline?? One found on M7 just before UL exit into Limerick.”

Anyone loose a trampoline?? One found on M7 just before UL exit into #Limerick #StormBrendan #Ireland #StaySafe @MetEireann pic.twitter.com/d7HlJYvKzS

A status orange weather warning remains in in place for the whole country with strong winds and the risk of flooding in coastal counties.

The warning effects Connacht, Donegal and Kerry from 5am to 9pm on Monday 13 January.

While a second orange weather warning is in place for Leinster, Cavan, Monaghan, and the rest of Munster from 8am to 3pm.

Met Éireann have forecast that gusts of up to 130km/h could be registered in Atlantic coastal areas later today.

There is a significant risk of coastal flooding due to the combination of high spring tides and storm surge.

The RSA has issued the following advice to motorists:

They also issued the following information to pedestrians, cyclists and motorcyclists: