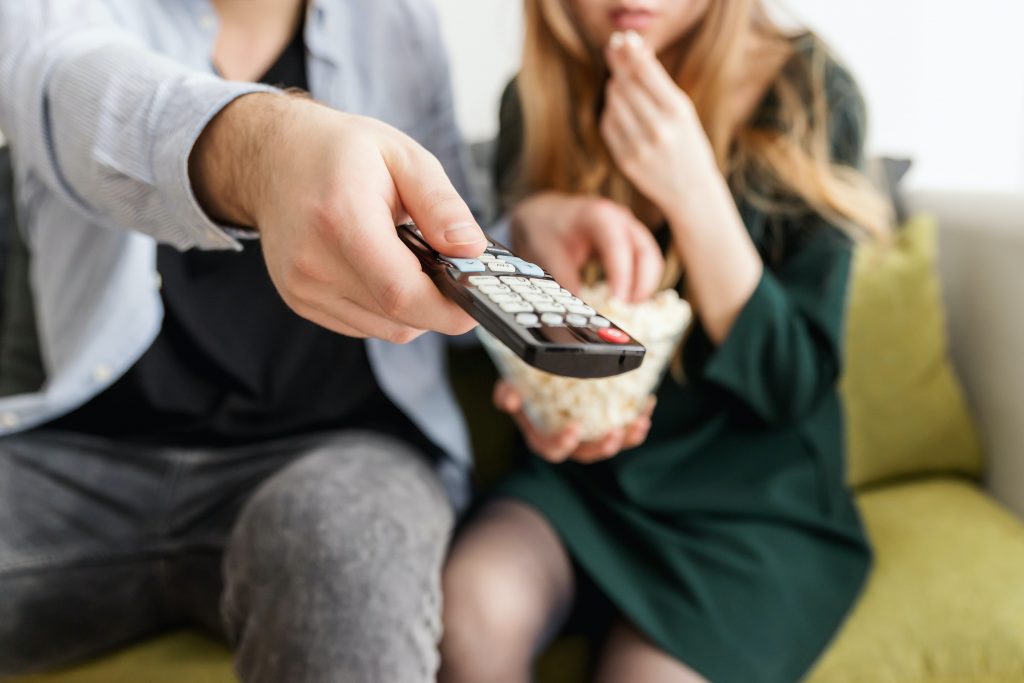 There’s no doubt about it. We’re absolutely flying through our ‘to watch’ list at the moment.

However, if you’ve finished off Tiger King or completed Normal People in one sitting, don’t fear. We asked the iRadio team what they’ve been bingeing on over the last few weeks and from gritty crime dramas to old classics, we’re sure you’ll find your next TV obsession right here:

“Right now, the TV show I’m glued to is Gangs of London. It’s not for the faint-hearted as it’s a gritty drama about the biggest crime gang of the London underworld but Colm Meaney is in it and he’s great.”

“I binged the whole of Sex Education since isolation kicked in. I started watching it three weeks ago with my housemate Brian but I got hooked on it and finished the two seasons in a few days. I find the characters and their stories very relatable and the topics that are dealt with are real teenage experiences that we rarely talk about. Plus, you’ll get a good laugh out of it too!”

“I can’t remember the last time a TV show completely blew me away like this one. The Act details the true story of Dee Dee Blanchard and her daughter, Gypsy Rose. Throughout Gypsy’s childhood, Dee Dee falsely claims that her daughter has a number of illnesses like leukaemia and muscular dystrophy. However, Gypsy actually has none of these conditions and Dee Dee has been dramatising her daughter’s symptoms for years. As Gypsy gets older, she starts to realise the truth behind her “illnesses” and tries to break free from her mother’s clutches. It was on RTE2 recently but the episodes are still up on the RTE Player. It’s so captivating and will leave you frantically finding out more about the real-life case!”

“It’s not a new one, but it’s been dubbed one of the best TV shows of all time. Before now, I kept putting off watching it because it would take so much time to consume it all, but then I realised that now is probably the best time to binge it all. I’ve watched all seasons over the last few weeks and would definitely recommend it. It completely blew me away with its storytelling and character development.”

“This is one that you need to go and seek out but I think all of the episodes are available on Youtube. Chris Morris, the Father Ted writers and Black Mirror’s Charlie Brooker were all involved in some of the most surreal comedic television that has ever aired. It caused outrage in 1997 with it’s one and only series. It consists of six parts and deals with everything from sex to drugs to crime and science. They masqueraded as a serious news programme and this allowed them to trick Noel Edmonds into participating in a totally fictional educational video warning against a drug called ‘Cake’. It caused great embarrassment for Edmonds, but he wasn’t alone, they also tricked Gary Linekar and even got a British MP to raise the matter of ‘Cake’ (a made up drug) in Parliament. It also allowed Steve Coogan to develop his much-loved character, Alan Partridge. So in summary, go watch the six episodes of Brasseye from 1997 and then seek out their 2001 special that caused even more outrage than those six episodes combined!”

“I’m obsessed with The Bold Type. There are four seasons out now so there’s plenty for you to binge on! It’s a series about three friends who work at a lifestyle magazine in New York and I find it perfect for a little bit of escapism.”

“I loved Britannia on Sky Atlantic – if Game of Thrones had a first cousin, Britannia would be it.  The show is set in 43AD as the Roman Imperial Army returns to crush the Celtic heart of Britannia, a mysterious land ruled by wild warrior women and powerful Celtic druids.”

“I’m currently glued to the final season of Homeland.  I would totally recommend it, plus you don’t really have to have seen the previous seasons in order for this one to make sense.  Having said that, it’s definitely the kind of show that needs your full attention for each episode. Otherwise, you wouldn’t have a notion of what’s going on!”