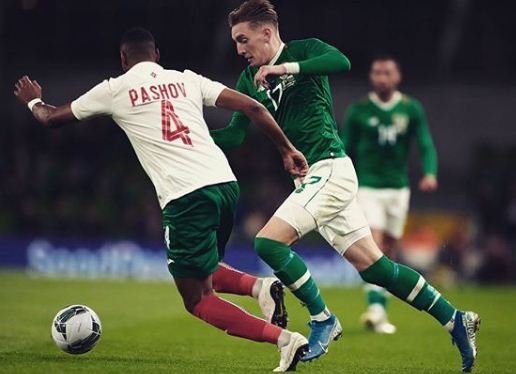 Ireland international Ronan Curtis has put a stop to his mothers social media after she became involved in a row on Twitter over one of his team-mates and questioned his manager’s tactics.

The former Derry City players mum Marie was banned after she questioned the weight of Portsmouth FC star Brett Pitman, whose nickname is Pitts.

Marie, who regularly posts her thoughts about Portsmouth since her son joined them, tweeted: “Has Pitts put on weight or is it just TV?”

“I’d like to apologise if you found my tweet offensive. I didn’t mean any harm in it but I’ve always been told TV makes you look twice the size.”

Jackett admitted he’d heard about the tweets over Pittman’s weight and his management skills but didn’t appear concerned.

“I’ve got no real comment on this particular situation, other than of course it’s been mentioned.

“Anyway, social media is what it is and everyone is entitled to their opinion on it. That’s just how it is.

“You can’t get worried about these things. Opinions are opinions and they are out there on social media.”

Marie posted in her last tweet she said: “Sorry folks my son has barred me from Twitter.”

This has led to a number of supporters urging her to keep on tweeting and they added #freemarie to their posts.