Woman crashes wedding claiming to be pregnant with groom’s baby 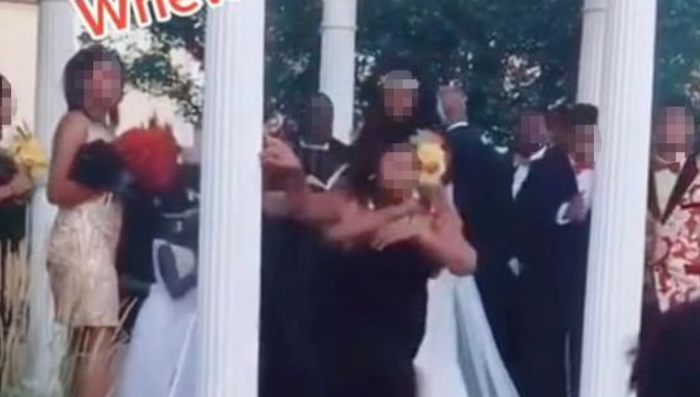 The woman claims to be pregnant with the groom’s baby (Image: Danielle on Demand/Tiktok WS)

A video showing a woman crashing a wedding in Detroit, Michigan, claiming to be pregnant with the groom’s baby has gone viral on Tik Tok.

In the clip that has been viewed more than 9.9 million times, a couple are moments away from becoming husband and wife when a shock intruder throws the day into chaos.

As their vows are being read, an angry woman approaches and starts shouting at the groom.

In the clip she is heard saying: “Anthony! You pretend you didn’t know me? didn’t get your psych med today?”

The pastor ignores her and continues with the ceremony.

However the woman continues: “Anthony I know you hear me! You’re acting like you don’t know me…I got your baby here!”

It’s only then that a member of the wedding party, who appears to be the bride’s daughter, comes forward and throws her flowers at the woman.

“You better get out of my mama’s wedding”, she’s heard shouting.

Since being posted on TikTok, it has been viewed a staggering 9.9 million times, also receiving 1.8 million likes, and over 44,000 comments.

One said: “Her daughter was not playinggg.”

And: “Come on camera man do better! You supposed to shoot where the action is” said a fourth.