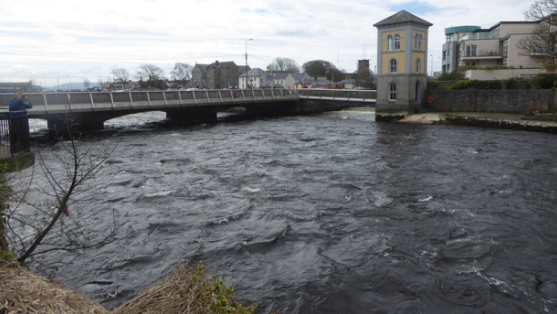 Patrick and Oliver Morgan saved a man from the River Corrib.

A father and son who rescued two paddleboarders last month have rescued another man in Galway today.

Patrick and Oliver Morgan removed a man from the River Corrib this morning after he was seen in the water by a pedestrian who raised the alarm.

He was taken to Galway University Hospital.

Just last month the fisherman and his son rescued two cousins who spent the night clinging to a buoy after being swept out to sea.

Sara Feeney (23) and Ellen Glynn (17) both from Knocknacarra in Galway city, got into difficulty while paddleboarding at Furbo Beach.

They spent 15 hours in the water before being rescued by Patrick and Oliver Morgan.

Taoiseach believes industrial action by teachers can be avoided

Taoiseach Micheál Martin has said the government will be engaging closely with the ASTI and he hopes industrial action can be avoided.

The mother and two young children who were tragically found dead inside a South Dublin home have been named.

Two separate funerals will take place for three family members who died in an apparent murder-suicide in Cork.

Lidl and Aldi stores will stop their middle-aisle products through the Level 5 Covid-19 restrictions.