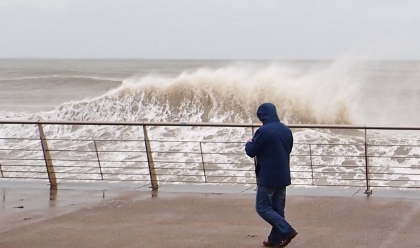 Winds of over 100km/h are currently battering the country.

A status yellow wind warning has been issued for the entire country.

Met Éireann issued the alert at 11am this morning and it will be in effect until 9pm tonight.

The ‘unseasonable’ 100km/h winds will now hit all of Leinster and Munster, as well as Cavan, Monaghan, Leitrim and Roscommon.

Kerry, Clare, Donegal, Sligo, Mayo and Galway had all been issued with warnings already – with the whole of the Republic now covered.

The forecaster said: “Strong southwesterly winds will give damaging gusts of 80 to 100 km/hr.”

And it seems the bad weather will stick around until late on Saturday.

A Met Eireann forecaster said: “Continuing very windy countrywide for the rest of today with strong, very blustery southwest winds giving some damaging gusts. Widespread heavy showers or longer spells of rain also with sunny spells at times too. Cool with highest temperatures of 12 to 16 degrees”.

“Tonight will be windy and showery with fresh to strong, gusty southwest winds and gales near northwest coasts. There’ll be further heavy showers of rain or hail, some of them thundery. Lowest temperatures of 7 to 9 degrees.

“Saturday will be a blustery or windy day. It will be mostly cloudy over the northern half of the country with spells of showery rain. Brighter further south with sunshine and showers. Highest temperatures of 12 to 16 degrees with fresh, gusty westerly winds, which will be strong to gale force in the northwest.”

Garda checkpoints across Donegal as level 3 restrictions come into force